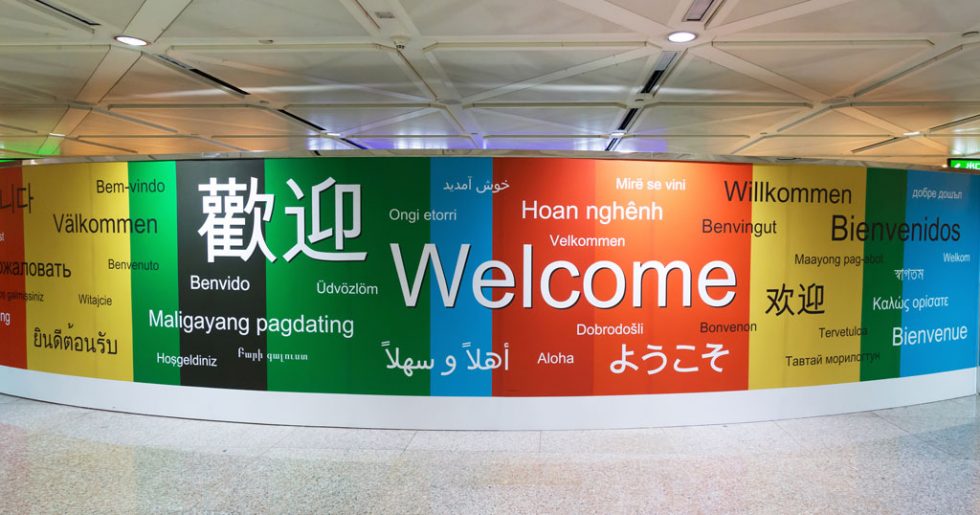 Learning a foreign language becomes much easier once you have arrived in your new country. You are constantly surrounded by the new sounds and rhythms of the native tongue which helps embed the language in the brain.

Reading will also become easier as you can see the signs and other written words more readily.

Full immersion is often quoted as the ‘only’ way to learn a new language. It’s also known as total language immersion.

While this may work very well for willing adults it can be very hard for children to cope with. However, there are many reports of children doing extremely well in this environment. Each child is unique and only you know your own offspring well enough to consider how they would deal with this.

Information received from friends who have done this tells me that full immersion language training works extremely well for very young children. Many expats choose to send their toddlers to local nurseries or kindergartens where the only language spoken is the local one. Without doubt, those children learn the language very quickly indeed.

The advantage of full-immersion language instruction

As a language teacher for young children I am often asked questions like, “What is the best method for teaching a foreign language?” “Does it depend on the learner’s age?” “Is the best method one that uses the learners native language or one that relies on full-immersion?” Many adults would agree that they learn much more quickly when teachers use only the language being studied. Use of a person’s native language can help in some situations but overall the use of only the language being learned gives the most opportunities for exposure and practice.

So does the same hold true for young children? Most certainly! Young children are still learning their first language and are quite used to not understanding everything that is being said. Hearing someone speak in another language is not as surprising as it is for older children who have not been exposed to foreign languages. Teaching a foreign language to young children in a full immersion setting has several benefits. They learn the language as a whole language system. They are, in effect, learning a second language as if it were their first. They do not need to translate from one language to another to be sure they are understanding what is being said. This gives them a huge advantage in becoming fully bilingual later on.

The most difficult age for full immersion is with older children. First of all, older children tend to be less interested in learning a foreign language. Of course that really depends on whether there are any motivational forces that are encouraging the learning of a foreign language. In the older grades children have become much more comfortable with their level of fluency in their first language and become frustrated when they do not understand everything that is being said. The most important part of using a full-immersion program at this age is to make sure it is clear that the children are not expected to understand everything all of the time.

At any age, a well designed, full-immersion program can have enormous benefits. Students in such programs are surrounded by the language, have more opportunities to speak and hear it and learn not to depend as much on their native language for translation.

All schools will have structured language lessons on the curriculum. Depending on the school and/or country these may amount to one lesson a week or one lesson each day.

Enrol you and/or your child in an activity where only the local language is spoken. Swimming lessons, for example, are an excellent choice. Understanding the context in which you are hearing a foreign language makes it much easier to grasp. And you have fun too!

Once again I’m advising you allow your child to watch television in the local language. Whilst they won’t understand much, a few words and phrases will be absorbed over a remarkably short time.

Having the local radio station tuned in and playing in the background can help immensely with absorption of sounds, rhythms and vocabulary.

Children, especially younger ones, don’t need much encouragement to go and play with other kids. Find a playground or park and send your child off to play. They soon find their own way of communicating and have fun at the same time. Try to meet and play with as many local children as possible.