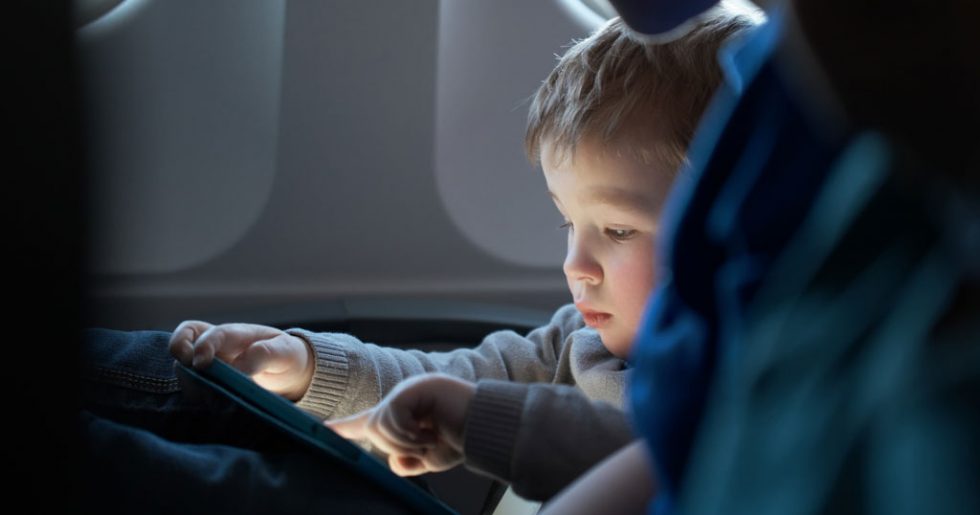 If you are moving abroad with young children then it will surely come to pass that you will be flying with children potentially quite often! Here are seven tips on how to do exactly that without losing your sanity.

If you approach flying with children with an attitude of adventure then believe me, it’s going to be a whole different experience than if you approach it with fear in your belly!

Do you remember when you were young? Any trip of any kind was filled with a sense of wonder and excitement so remember that feeling and embrace it for your little ones! Tell them it’s going to be a big exciting adventure with lots of fun. That way (fingers crossed!) your children will mirror your mood. Just as if you’re tense and worried then they’ll go right ahead and mirror that mood instead!

So remember that children are mirrors to our emotions and be mindful which ones you pick for the journey.

Tell them what is going on

Also, don’t forget to tell the kids what’s happening. Explain how long the flight is, where you’re going, who you’re going to see, explain the rules etc. If you fly a lot with your children then they will already know but in the first few instances it’s best to tell them as much as possible as kids don’t much like ‘the unknowns’.

So you’ve approached the flight with a sense of adventure and the kids are excited and they know exactly where they’re going and you are either pretending to be excited or that smile is genuine. Either way, you’re now in the departure lounge with one or more very excited little munchkins on your hands. This is the point where you want to wean that excitement out of them so it doesn’t translate as hyper activity mid-flight.

The trick here is to wear them out before you board!

I used to run about the airport with my two little ones, getting them to do star jumps and basically keeping them as busy and as active as I could. Let me say here, you must forget your dignity! People used to look at me curiously and I would think “laugh now, but you’ll be soon be grateful once we’re on that flight and the kids are asleep!”

So do your utmost to rob them of their energy so they will (hopefully) sleep like angels on-board.

It amazes me what airlines serve up as children’s meals on-board. To be fair I haven’t ordered one in a long while and that’s because the last time I did it was laden with junk food, chocolate bars and sugar. Now you and I both know that sugar and children in a confined space is a recipe for disaster. I recall seeing the dinner trays coming my way and I literally swiped the chocolate bars straight off them and handed them to the stewardess who gave me a very relieved smile. They know, even if some parents don’t, that sugar on-board is a complete no-no. Not unless you want a hyper-active monster on your hands…

So what I used to do was order adult meals which usually had a more balanced diet and brought with me some healthy snacks for them.

Don’t expect to sleep yourself. And especially not if you are traveling solo with your little darlings.

I remember one transatlantic flight and I was on my own with a 2 year old and a 4 month and astonishingly enough we got upgraded. Marvellous I thought to myself prematurely. I can give them their bottles and they can go to sleep and I can have a glass of champagne!

Little was I to know…

There was a lot of turbulence on this particular flight so the baby had to come in and out of the cot and whilst I was tending to her; my son had discovered the button that made the chair go up and down and of course thought this was the best thing since sliced bread. Neither of them seemed to want to sleep and I was acutely conscious of the business travellers around me. But thankfully the staff were great and eventually they did settle and the next morning the people told me how well behaved my kids were. Between you and me, I thought they were talking about different children!

Basically don’t expect to have a calm flight with your kids; if you get sleep it’s a bonus!

Take a change of clothes

Flying with children? Then take a change of clothes for them and for you! The first time I went without a change of clothes I turned away for 30 seconds and my son had spilt water all over him and I spent the rest of the flight trying to dry off his trousers. On the subject of clothes, give them practical clothes to wear. I remember seeing a woman in the departures lounge and for a transatlantic flight she had three kids under the age of five dressed head to toe in white. Well my kids would never have made it past the boarding lounge dressed in white! So all credit to her and goodness knows how she did it! But I wouldn’t necessarily advise white as the best option…

The other thing to keep children going on long flights or if you need to change flights is to carry some kind of gift or something extra for them. (This is in addition to the activities you are already bringing for them as you use this one only in desperate measures.) So if it’s my daughter it will be a magazine with extra things to colour in and if it’s my son then it might be a book to look at. But something fresh and new to present to them when they’re really really bored.

Flying with children needn’t be a daunting experience. Approach it with the right attitude, take the necessary practical steps pre-flight and mid-flight, avoid sugar at all costs and whilst it might not be the least stressful thing you’ve ever done at least you have done everything you can do minimise the potential damage. And you never know, it might even be an adventure!