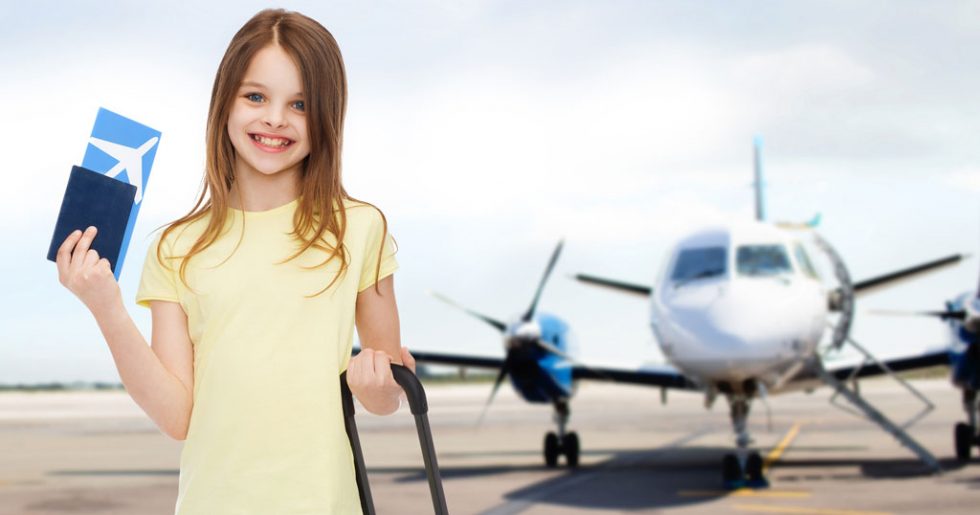 If you need to put your child on a flight on their own it can be a lot more stressful for you than for them. Your child may well see it as a big adventure with lots of excitement, while you view it as a big risk fraught with danger. But there are some things you can do before you wave them off to ensure a stress free flight for parents and child alike.

Airlines calls children who are travelling alone ‘unaccompanied’ children or minors, and most have a system in place to help make the trip a smooth and comfortable one for your child. However, you must check what the rules and restrictions are for your airline of choice before you book as they can differ wildly between companies.

These systems are typically for 5 to 15 year olds and include things such as having an escort at the airport, priority boarding, help with passport control and baggage claim and general supervision until they are picked up at the other side. Children younger than 5 years old must be accompanied by an adult.

‘Unaccompanied minor’ systems cost extra and are sometimes not compulsory to book for a child depending on their age and the airline. So while it is worth the peace of mind they offer, you may choose to forgo the whole thing if your child is mature enough to travel safely on their own.

Talk about some of the things that have happened to you during flights, make it funny and informative so it doesn’t scare your child but they learn what to do if a similar thing happens to them.

If you are not using an airlines unaccompanied children programme you need to make sure your child is prepared for any of the usual travel problems that might come up, such us airline security issues, flight delays and cancelations, lost, stolen, or damaged baggage and personal safety in general. Talk about some of the things that have happened to you during flights, make it funny and informative so it doesn’t scare your child but they learn what to do if a similar thing happens to them.

Actually, even if you do use the unaccompanied minor program, things can still go wrong, so make sure you cover all potential eventualities with your child in advance regardless. I speak from painful experience!

Her flight was cancelled!

Last Christmas, my daughter was flying over to South Africa from her school in the UK. She has done this journey many times but this one was different – her flight was cancelled at the very last moment.

Here is what normally happens. Someone from her school takes her to the airport along with numerous other kids flying back to their overseas homes. The school contact then hands them all over to the relevant specialist unaccompanied minor officials. At Heathrow Airport in London there is a dedicated lounge area for children travelling alone on this particular airline. It has Wi-Fi so they are well occupied! The kids are safe, contained and in the charge of people who know what they are doing. When it’s time for them to board their plane, they are called up, paperwork checked and taken to the plane where they are handed over to the flight crew.

So far, so great! Daughter got on the plane. And waited. And waited… Her flight usually leaves around 8 or 9pm but it didn’t. At just gone 11pm the pilot announced that he couldn’t fly now because he had gone over his hours. The flight was cancelled and all passengers had to disembark. By the time they all got off, it was midnight.

Nobody was in charge of the children anymore

Now, the unaccompanied minor people had gone home for the evening; so nobody was in charge of the children anymore! Thankfully, daughter is suitably savvy enough to know to attach herself to someone reliable – there were younger kids on board who had no idea. We shall all be eternally grateful to one of the flight crew who stuck with them all until they were safely sorted out.

We had absolutely no idea where our daughter was, or who she was with.

Here in South Africa we tend to watch the internet for departure information. But nothing changed on the airline’s website at all. We were panicking somewhat, but have you ever tried calling a company at midnight? Even an airport? Nobody is there. We had absolutely no idea where our daughter was, or who she was with. The airline were horribly dismissive, but that’s another story. I can’t recall why she didn’t telephone us to let us know, but there was a valid reason.

Anyway, at 2am UK time – 3am here, we finally received a telephone call from her – she was in a “really nice hotel” and the manager of that hotel had told her, most emphatically, that “she must phone us right away”.

So, all’s well that ends well. She had a lovely time in a smart hotel and caught the next evening’s flight and was a bit traumatised by the event – but not as much as we were!

Be aware that if your child is not in an airlines unaccompanied child programme, if there is a delay or unscheduled stopover for any reason then your child will be treated like any other passenger. But seeing our story above, being on the programme may not make a difference. It may be down to the time of day they travel, but be prepared.

Make sure your child tells an airline representative of the situation as soon as possible and they will try and help but there is no guarantee that the airline will be able to offer any additional services. In the case where overnight accommodation is required the airline might have a policy of taking no responsibility for unaccompanied children and your child will be turned over to the local authorities for the night, so it is very important that you check on the particular policies of your airline and choose one that is more appropriate.

How to prepare your child for the flight

In this age of mobile devices make sure that phones are fully charged, topped up with credit and unlocked for use in the destination country. Also ensure that all pertinent phone numbers for yourself, the destination location, local and international police services and the airline helpdesk are saved on it and easy to find.

If possible, you should go with your child through security and preferably all the way to their seat in the aircraft although these days you may not be allowed past security, so check in advance. Make sure the plane staff know that your child is unaccompanied and point out the cabin crew to your child so they know who to go to if there is a problem. Even if you are not using their programme most cabin crew are very considerate of children travelling alone and will keep an extra special eye on them whenever possible. Also, the person picking up the child on the other side may be able to get an escort pass so they can be at the gate at the arrival airport and help with baggage claim.

In short, make sure you thoroughly check the airline polices before making the reservation. Make sure you know who to contact at the airline and the airline has at least two contact details for you. If possible escort your child onto the plane and introduce them to the cabin crew and top up all phones with charge, credit and information. For added peace of mind, stay in the airport until the plane has taken off and keep track of the flight progress online.

And breathe. Your child will enjoy the trip, watching all manner of movies and being treated like royalty!

UPDATE 26th February 2016: British Airways have announced they are stopping their Unaccompanied Minor service. Jamie Bowden, a former BA Customer Service Manager at Heathrow comments in the news article linked here, “British Airways have long had a link to UM travel, but I suspect now they have made this decision, it will not be long before other carriers follow suit.”

Tricky times ahead for us expats.