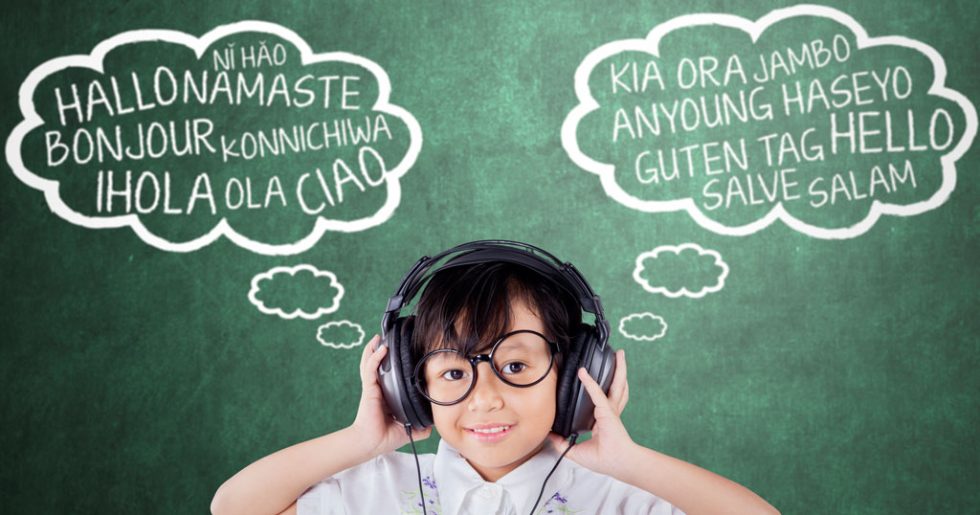 The best way to raise a bilingual child is to talk a lot and worry very little.

We’ve all heard the stories – ‘that mum at playgroup whose child can’t talk properly because she insists on teaching him two languages; it’s confusing for the poor little soul’. Well we call bunkum on this. It’s a myth and here’s why…

Language is a pattern

Children are fantastic at learning patterns and the earlier you start to teach your child multiple languages the easier it will be for him to learn. From birth babies can differentiate between different linguistic patterns and can quickly recognise the vocabulary in each one.

Now, almost all myths have some underlying truths so let’s get this out of the way from the start. Yes, there is some evidence that a baby exposed to multiple languages may start to talk slightly later than a baby exposed to only one. However extensive research has proven that once talking, their developmental patterns and speed show no significant variance; in fact, they learn much more about decoding languages and will find it easier later in life to progress this skill and learn others.

It is also true that toddlers taught two or more languages from birth sometimes muddle their speech and use words and phrases from different languages in the same conversation. There’s a simple reason and it’s not as alarming as some people think.

From birth until three a child is still in the process of mapping out linguistic patterns. Depending on what exposure he’s had to each of the languages being taught, his vocabulary may vary from one language to another. So it is perfectly logical to him to use the word he knows as a substitute in a sentence for the word he’s not yet familiar with. “Want to play bola!” is a simple example. This child is learning English and Spanish. He knows he wants to play ball and is able to express his desire, which is fantastic – he just doesn’t remember the English word for ball so has substituted a Spanish word. No big deal. Respond in English “Yes, let’s play ball” and maybe he’ll remember it next time.

The best way to raise a bilingual child is to talk a lot and worry very little. Get the whole family involved, be committed to your goal, be flexible – but have a structure. Structure is important.

In order for the child to become fluent in both languages there has to be sufficient exposure to each and sufficient time to practise. To make this easy we’ll assume our child is being taught both Spanish (native) and French. In this scenario the family live in Spain, which is their Father’s home country but their Mother is French. She wants the child to speak her native tongue to communicate with Grandparents etc, so the decision has been made before the child is even born to teach both languages.

There are two basic structures that most people use; adapted slightly to meet their own requirements.

One Parent One Language (OPOL)

The first and perhaps the most effective is One Parent One Language (OPOL). This means that each parent will communicate with the child only in his or her native tongue. This is a fantastic way to ensure that there is exposure to both languages but there are some things you need to consider. As the child gets older he’ll attend school, where the language will be local. For our family this means the child’s majority language will be Spanish. In order for him to learn fluent French (the minority language) studies suggest he needs to hear and speak it up to 30% of his waking time.

This means you need to ensure that the parent speaking the minority language is able to spend enough time talking to and playing with the child – it might not work if mum is teaching the minority language and she doesn’t get in from work until 1830 every night, just in time for bath and bed. What will happen is the child will learn just enough vocabulary to communicate with mum during those times but will not feel it necessary to widen that vocabulary and become fluent in conversing with others.

The second most common method is Minority Language at Home. This means that in the home everyone speaks the minority language (in this case French) and the child is exposed to the native or majority language at playgroups, nursery, school etc. This method can work really well for expat families preserving the language of their home country, but will not work for our example family unless dad speaks fluent French. The only downside to this method is that from birth the child will learn only the minority language and will not start to learn the other until he mixes with other children and adults. In reality though, if he goes to playgroups and nurseries from an early age and is fully immersed in the native language outside of the home, he’ll still find it easy to learn.

Remember above all that you’re doing this to help your child and to give them the best possible start. Research, read, watch, join groups and talk… don’t feel isolated and don’t give in to peer pressure.