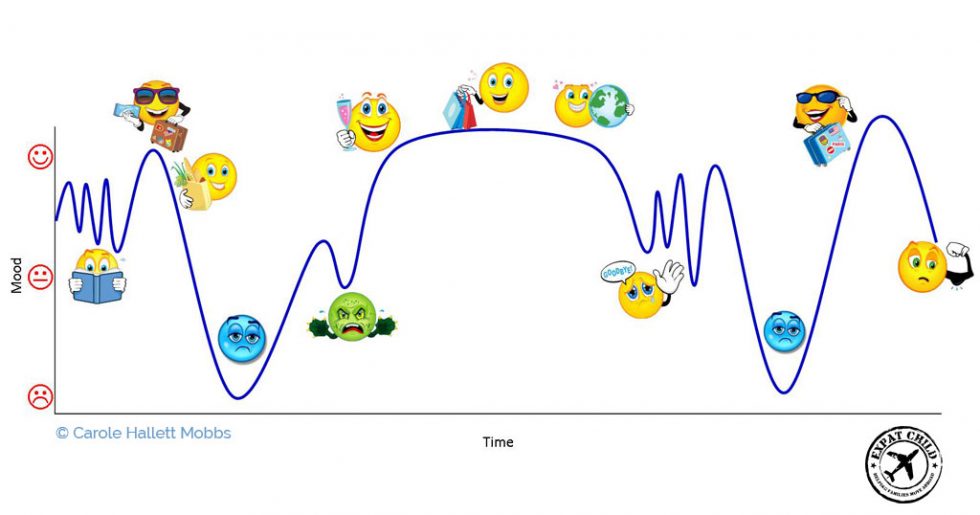 Further to my generalised article about culture shock, I decided to expand on certain aspects of this expat-relevant ‘condition’. As mentioned before, culture shock may hit you at a certain point of your stay in your new country; this may be instant, it may take about six months or even happen several years down the line.

There is a general graph that displays this movement. Sometimes called the ‘Cultural Adaptation Curve’ amongst other titles, the shape is basically the same, clearly displaying that you do get over culture shock. After the big dip, the graph curves up again.

Personally, I think that graph over-simplifies the process and I have created another one which is more accurate, and more fun, I think. You can fill in your narrative for this as you please. In the process of creating the graph above, and whilst writing the first post in this culture shock series, it suddenly dawned on me that I am still suffering culture shock after eighteen months of living here in Berlin. I recognise in myself many, if not most, of the symptoms – both psychological and physical. I am not happy. I am not depressed, but I am definitely not full of joy. This is not like me.

(Edited in 2017 to add – In retrospect, much of the problem was actually PTSD – Post-traumatic stress disorder – following the Japanese earthquake in 2011 and subsequent events, plus our move to Berlin, documented elsewhere.)

Anyway, I got a little distracted and tried to plot my own graph for the past few years.

Eventually, I simplified it to the following. Here is my personal cultural adaptation graph at the time of writing this. Doesn’t look good, does it?

So now I need to deal with this. Somehow.

I know what I am supposed to do to help get over culture shock – get out there, meet people etc, and believe me, I have tried and tried. I know it isn’t ‘me’, as I had no problem in Tokyo or even when I moved around in the UK, but here… well, it is just not happening.

As tempting as it is to blame the place, apparently that is a symptom of culture shock in itself, so it’s hard to know where to go from that!

If anyone has any off-the-wall suggestions, please do let me know because I have tried absolutely everything in my power so far.

How does your personal graph look? It’s an interesting, if slightly time-consuming, exercise. And quite an eye-opener into expat resilience.

[Update: it’s now May 2013 and I can happily report that my cultural adaptation graph is back on the upturn! This has absolutely nothing to do with the country I’m living in right now (Germany), and more to do with the fact that I’m moving elsewhere! We’re off to South Africa. A lot has happened over the past few months, and this sense of ‘moving on’ is both metaphorical as well as literal. Whilst I realise I’m not supposed to ‘blame the country’, in my mind it’s obvious that not every relocation is a good one.]

I’ve updated that graph now. As you can see I’m back ‘up there’ and can conclude that it wasn’t necessarily a culture shock problem in Berlin – I just didn’t like it there. Obviously this is a very simplified illustration of my life over the past few years – and in this graph it does look as if my mood was rising whilst in Berlin. This gentle climb was entirely down to me creating ExpatChild and the lifeline this project gave me.

It also shows that some countries just do not suit everyone. I do not consider it a ‘failure’ of any form to dislike a country that other people adore. I know I love some places that others can’t bear; everyone is different!

PS – yet another update to this subject, June 2014

I mentioned about physical and psychological symptoms of culture shock in a previous post. In it I added,

“Not every physical problem can be attributed to culture shock, of course, so seek help where necessary.”

Now in South Africa, it seems the medical care is brilliant! As a new patient with my GP, I was subjected to a battery of blood tests. Apparently this is normal for a new ‘customer’. Turns out I have hypothyroidism, undiagnosed for the entire time I was in  Germany even though I went to the doctors with various symptoms… Now satisfactorily medicated for this I feel ‘normal’ again. Oh, and I’m also apparently post-menopause, so that’s nice too.

So the motto to this constantly changing tale is, if you don’t feel ‘right’, check with a doctor. You never know!

And this all reminds me of the wonderful ‘Hitchhikers Guide to the Galaxy’:

“We are now cruising at a level of two to the power of twenty-five thousand to one against and falling, and we will be restoring normality just as soon as we are sure what is normal anyway.”

How to Make Sure This Doesn't Happen to You?

I offer one-to-one support and targeted help and advice to help YOU navigate your own expat journey. I can make sure you are well-prepared for expat life. Hop on a 1-1 call with me to find out more