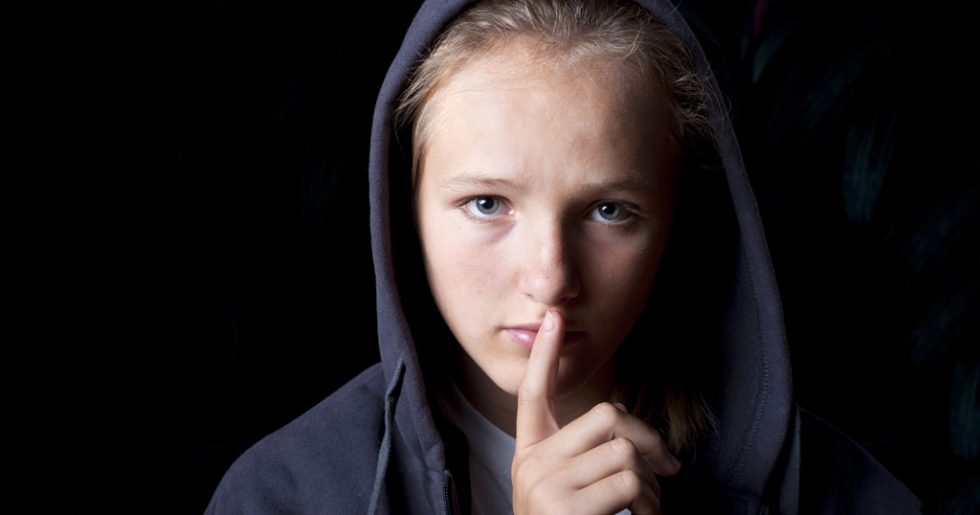 Note from Carole: What follows here is a piece of writing from a contributor who wishes to remain anonymous. If you feel you can provide advice and/or sympathy via the comments, please be sensitive. If you have your own tale to share, or can provide a more detailed response, please get in touch with me. Anonymity is absolutely guaranteed.

My daughter celebrated her 14th birthday by going out with her best friend for lunch and a spot of shopping. She had a great day out, a large slice of chocolate cake and brought herself a little gift with her pocket money.

On her return she unwrapped the small package and locked herself in the toilet. She took the pencil sharpener out, dismantled it and used the blade to carve a deep cut into her leg.

The only positive result of that shocking incident was that she told me about it right away. This disclosure is a massive step forward for her and means she wants to stop cutting herself. She is now under the care of a specialist mental health service and a competent school counsellor.

My husband and I are based overseas and our daughter has been in a boarding school in our home country for nearly 18 months. She loves her school, has many good friends and is doing very well academically. And she self-harms.

We have considered pulling her out of boarding school. As she can’t live in this country with us because it’s not safe, the schools aren’t good and her life would be severely restricted we considered returning home as well. But it’s not the boarding school causing these issues – she self-harmed before she went there. In fact, this school is actively good for her in so many ways. Besides, it’s possible that the root of her problem is her having to start over each time she moves, so both these options would be disastrously counter-productive.

We’ve lived in five countries during her life. Not many compared to some; four more than others.

How do children cope with the expat lifestyle?

Before considering our initial move overseas with we asked around and heard many positive stories about leading the expat life with children. Nobody told us anything negative at all. Everyone else’s kids seem to cope well with this lifestyle. Perhaps this is a myth?

She’ll have a greater world view and understanding of the diversity of cultures.

Indeed this is true and I’m sure it will be entirely relevant when she’s an adult. Right now, though, it is not an issue. Will she even make it to adulthood? I can’t help my thoughts drifting in this agonising direction.

Kids are resilient and can deal with anything.

No. They can’t. They are, however, very good at pretending all is well.

Agree. She can speak four languages and is top of the class for another two, but she cannot find the words in her native tongue to explain why she self-harms.

She can’t talk to me about it much as she gets too upset, but she can talk to counsellors and staff at school, which is good. Occasionally I am told snippets but most of the details remain a mystery to me. I’ve spent hours researching self-harm and the mental health of TCKs but there is little I can do to make it all better for my daughter.

In trying to explain the problems that led to her self-harming she cites bullying in her previous school which spilled over to cyber-bullying.

My daughter was on the receiving end of all these, and in all countries. In her last overseas school this bullying was even being perpetrated by teachers. What chance did she have?

Sticks and stones may break my bones, but words can break my soul.

A fair amount of the bullying during her early school years was based on her not ‘looking the same’ as most other kids in her school and being “too stupid to speak our language” (after only being in that country a few weeks). International schools do have kids from many countries, but overall there seems to be far more from the host country and, as the majority, it’s this group that a child aims to ‘fit in’ with.

Not fitting in anywhere

Another reason she says causes her to cut herself is not knowing where ‘home’ is and not fitting in anywhere. As far as I can tell, this is a common TCK problem – how do others deal with it? She desperately wants to fit in but is so used to being different that she’s confused about who she is and who she wants to be. On one hand she wants to be different while on the other she wants to fit in.

As a mother, I cannot begin to tell you how I feel about all this. I’m sure other mothers can understand my pain without me going into details. Of course, I blame myself for my daughter’s problems. But we have (had?) a happy family life. With each move we discussed everything with her as a family, listened to her concerns and worries and so on. Love and openness have been a constant. Does she self-harm because of us or despite us?

Who’s to say she wouldn’t have self-harmed if we’d stayed put in our home country. I feel she would have taken this, or another self-destructive, route regardless of her domicile. Bullying happens everywhere. One of her reasons would be different, but I believe the outcome would be the same. Adolescence is a hard time.

I have nobody I can talk to about all this. It’s too ‘heavy’ and far too personal to dump onto new friends. I have to lie and say “Yes, she’s doing really well”, and watch other balanced and happy children live well.

Monsters don’t live under your bed; they live inside your head.

Recently I moved her bedroom around and seeing all her bits and pieces from her baby-and-child years was heart-breaking. Reminders of her life before she self-harmed. I also found and disposed of hidden pencil sharpeners with no blades and various other sharp items.

No longer is she my gorgeous, innocent, smooth-skinned baby; now she is my gorgeous, damaged, scarred teen and that pain is enormous. If only I could take away all her pain and turmoil. The days of a ‘kiss to make it better’ are long gone.

There is so much more I could write, but this has gone on far too long already.

Thank you to Carole at ExpatChild for giving me an anonymous, supportive place to share this.