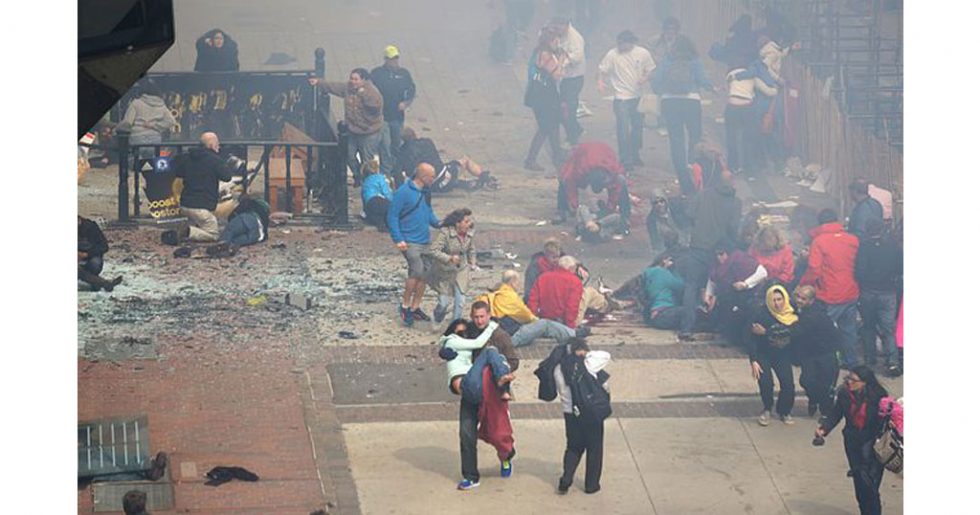 First published on 16th April 2013 in response to the Boston marathon bombing.

Yesterday’s appalling news from Boston serves to highlight how easy it is for horrible things to happen, usually when we least expect it.

For those of us living abroad it can be very difficult to see or hear of problems at home but not to be able to do anything about it. It can be even worse for family left at home if they hear of problems affecting a family member in a far flung part of the world and be unable to render aid. I speak from personal experience when I say it is even worse for children. I went to a boarding school when my parents moved to Nigeria shortly after I turned 11. I knew that this was a potentially dangerous posting, something that was brought home to me a few months later when my mother and I were stuck in the airport at Lagos during an armed robbery and again a few months later when the borders were closed due to an attempted coup.

This was, of course, before the days of the internet, email and easy international ‘phone calls so whenever I was at school and away from my parents I was obsessed with hearing as many news bulletins as possible. I wanted to be sure that nothing was happening to my family. These feelings intensified during our posting to Turkey in the 1990’s. We lived in the east of the country and it was at the height of the problems with the PKK. Bombings, kidnap threats and worse were commonplace and we went everywhere with bodyguards. Whenever I called the airline to confirm our flights home I would always receive a warning that they advised against any travel to our home town. I would scour the newspapers daily and could not sleep easily until I had heard the late news on the radio. More recently, when our children, who are very young, heard about the London riots in 2011 they did not settle until they had spoken to all our family in the UK. Luckily for us we now have Skype.

When events, such as the Boston bombing, happen it is important to make sure that children understand the context of the event, the repercussions and that their loved ones are safe. Of course, if family are potentially involved in such an event it becomes even more important to find a way to ensure that children are reassured as soon as possible. In these days of mass media and internet news children would not be likely to worry because of a paucity of information, indeed the opposite may well be true and there is a danger of information overload.

As soon as something happens it is important to tell your children, before they see potentially distressing and worrying information on the television and internet. Give them a fair and honest account and, if they want to watch the news make sure that you watch it with them so that you can put it into context. Younger children may well not understand the concept of a ‘news loop’ and worry that events are repeating themselves so make sure that they understand that there is a single incident. Very small children will need a lot of physical reassurance, and older children may want to speak to relatives to reassure themselves that everything is ok.

Schools have become increasingly sophisticated at supporting children through such crises. When I was young my house parents often lacked understanding and sympathy, they were exasperated by need to keep up to date with information and my worry for my family. I know from personal experience (we were living in schools in the UK as boarding house parents at the time of both the 9/11 tragedy and the London tube bombings) and from speaking to people whose children have lived in boarding schools in recent years. Nevertheless if you are living abroad but have children in boarding school it is worth speaking with the house parents to ensure that they know how best to support your children if necessary.

Republished with kind permission via Ersatz Expat: How to help your children cope with tragedies they see on the news.

Photo: Aftermath of the 2013 Boston marathon bombing show people helping others from the scene. Photo credit – via Flickr by Aaron “tango” Tang