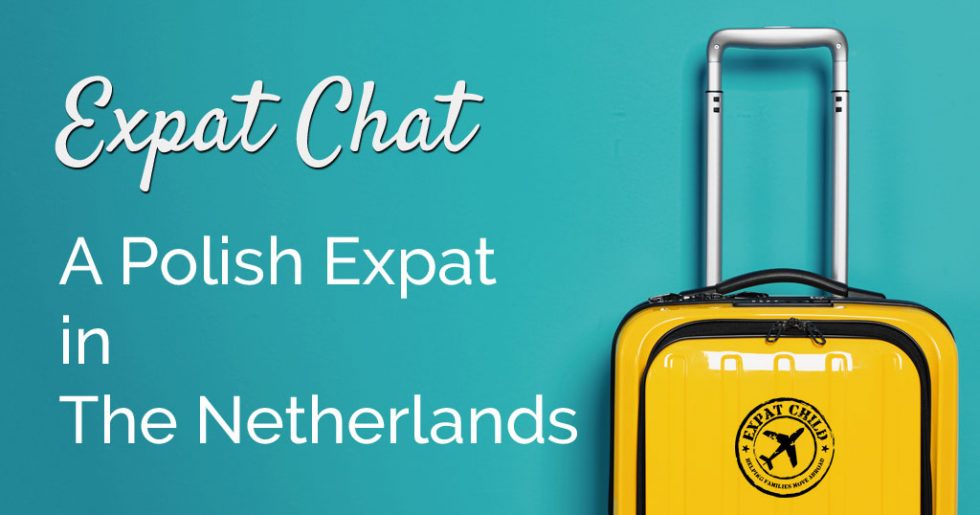 Polish expat in The Netherlands What is your name? Olga

Where are you originally from? Warsaw, Poland. My husband is German.

Where are you living now? Rijswijk, the Netherlands

How long have you lived there? I’ve been living here for 3 years, but my husband came here a year before me.

Where did you live before that? In Hamburg, Germany.

What are your future plans? Raise my three children, maybe find a job, keep on blogging, learn new things.

Did you bring family and/or pets with you? How have they adapted? I have brought my 6 week old daughter, who is now 3 and a half. She never had to adapt because at that age she never realised that we actually moved.

Were they born in your ‘home’ country or in your adopted country? Or elsewhere?! My oldest was born in Germany, but we came to the Netherlands when she was only 6 weeks old. My other two children were born here.

Can you share any moments when you realised your kid wasn’t from your ‘home’ country. When my oldest started speaking Polish with an accent that seems to be a combination of German and Dutch. When she wanted to take part in the Dutch traditions. Otherwise, I don’t expect her to be Polish, but I do want her to speak, read and write it.

Do you speak the local language? If so, how long did it take you to learn it? Yes, I speak Dutch and it took me around 2 years to learn it. I was lucky enough to have a good knowledge of German before I came here, it definitely helped. Also, I had great teachers who totally motivated me to learn!

Have your children learned the language? What method of language learning worked best for them? My oldest speaks all three languages, including Dutch. We usually stick to the OPOL method – I speak Polish, my husband speaks German and they attend a Dutch daycare. My little daughter is 2 and she seems to use words in all languages. My boy doesn’t speak yet.

What three personality characteristics would you consider are necessary for a success expat life? Flexibility, curiosity, resilience

What do you miss? My family, my friends back home and my hometown, Warsaw.

What were the biggest challenges you faced when you moved? Finding a place to live.Getting used to the totally different healthcare system. Getting through the formalities.

How do you keep in touch with your friends and family in other countries? Facebook, Skype, my blog, but also phone calls.

Where do you take your holidays? In the summer, we usually go to our respective home countries. In autumn, we like going to France, Spain or Malta for some sunshine.

Please share a debunked myth or stereotype about your host country. The Dutch are supposedly cold, rude and distanced. I found them extremely polite and always eager to help. It’s just that they don’t seem to show politeness by saying lots of polite words, but rather by actions.

What customs do you find most unusual about your adopted culture? Sinterclaas and Zwarte Piet – while in other countries Santa Claus is coming on December 6th, the Dutch celebrate the arrival of Sinterclaas much earlier, and he leaves on the 5th, leaving some gifts for the children. Zwarte Piet is his Moorish helper (there are several of them), and there is a huge discussion in the Netherlands whether the whole Sinterclaas tradition is actually racist- after all there is one white man in power and he has black servants to help him. The Dutch would defend this tradition to their deaths, but there are discussions whether to get rid of Zwarte Pieten, or maybe introduce Pieten of all colours. I am not sure how this will end.

Tell us about local food you and your children love or hate. Dutch food is not known for being delicious. I am not a huge fan of it- for example there are bitterballen, deep-fried meat balls, eaten with mustard. They also eat a lot of pindakaas – peanut butter, and I am not a fan of that, either. However, there are some delicious dishes: pea soup, called erwtensoup or snert for example – perfect for the humid winters. Fish and sea-food, as the Netherlands are very close to the sea. I (and my children) like kibbeling, pieces of flaky soft white fish fried in a special coating. Then, there is also the niewue haring– almost raw, fresh young herring, served with onions. It is not for everybody, but I enjoy eating it. The sweets are also delicious, especially stroopwaffels – big flat thin waffles with a layer of caramel inside, poffertjes (cute little pancakes- they’re really little, maybe three cm diameter), eaten with sugar and butter, apple tart (apple pie, yum!), and vla – a diary product similar to pudding.

Is there anything that is ridiculously cheap or expensive compared to where you used to live? I consider the Netherlands to be rather expensive. We have just bought a house, and I couldn’t believe how much a house costs in comparison to Germany or Poland. Food (and eating out) is also more expensive, but not ridiculously so.

What do you most appreciate in your new country? The laid-back attitude of the Dutch concerning raising children- the Netherlands are generally a very child-friendly country. The fact that I get to experience the best of both worlds by staying at home with the children and being able to send them to daycare for a few hours every day. The fact that I get the privilege of raising multilingual and multicultural children.

How did you make new friends in your new home? Most of my friends are fellow expats. I contacted a not-for-profit organisation that takes care of pregnant women and moms in my area. Since then I’ve attended their playgroups and events, and found many friends who are an inspiration and offer great support!

How do you spend your time? Have you taken up any new hobbies in your adopted country? When I’m at home with the children, I play with them, read to them, and basically do whatever all parents do. When they’re at daycare, I blog – and blogging has become my new hobby. I also try to keep on reading, I read tons of books before I had children, and it is another hobby of mine.

Tell us a bit about your own expat blog. How long have you been blogging? My blog will be 2 years old in July. It has started as a trilingual blog in Polish, German and English, but soon became English-only.

Why did you start blogging? It is a long story, but basically after a rather traumatic incident including being accused of abusing my child and having the police called on me, I realised that I needed a platform to vent my frustrations. However, the European Mama Blog soon became more than just that, and even now it enables me to share my experiences of raising multilingual children, and living the expat life. It also keeps my brain in good shape 

Has it contributed to your well-being in any way? Oh, yes. Not only because I could share my frustrations (but also my stories, thoughts and ideas), but also because of the validation I’ve received for my writing. Also, it is so much fun- and when you have fun, it does wonders for your well-being!

Thank you for sharing this with us, Olga!